Happy Thanksgiving from the staff of… 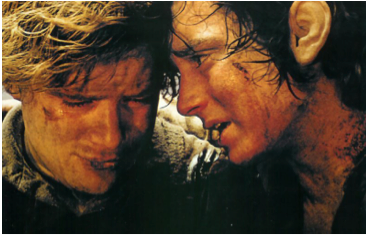 The following essay, by Joey Martineck, was first published on February 22, 2016 online at Beautiful Things. 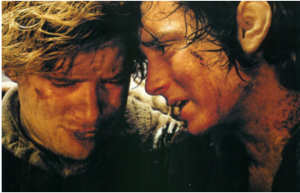 It’s a struggle for me. It’s a struggle for every man. We like to put our strengths on display and conceal our weaknesses. Sadly, it’s possible for us to know a man for years – to see him every day at the office or every weekend at church – without ever having a meaningful conversation with him. We stay at the surface because it feels safe. But from my own experience, I can testify that we were made for more than only pragmatic, surface level conversations.

Time for some Honesty:

When I worked in sales, my life appeared successful on the outside. Inside though, I felt dead. My accomplishments were my way of coping with a deep insecurity I had carried within me since I was a kid. Eventually during my career, I reached a place of vulnerability where I experienced brothers in Christ loving me in my weakness. That moment changed my life dramatically. But it only happened because I was willing to look honestly at my problems.

Are you in touch with your weakness? Or are you numb like I was for so long? In his book Wild at Heart, John Eldredge says that “a wound unfelt is a wound [that remains] unhealed.” The crisis of male vulnerability today is not an accident. It stems from the insecurities we have as men. It comes from the way we have tried to cope with deep hurts in our life. In my hurts, I relied on myself and other’s opinions of me rather than the Father who loves me as I am. But we end up deceiving ourselves when we ignore our pain. The Lord encourages us to “not be afraid” to make the first step toward vulnerability: looking honestly at our brokenness (Isah 41:10).

I was at a men’s retreat in Tiger, GA a few years back. On the retreat were some of the top Catholic ministry leaders across the country. After brief introductions, the MC opened the retreat with this comment.

“My name is Jack*, and I am a failure of a husband, father, and Catholic.”

I was absolutely shocked. Never before had I experienced grown men being so genuinely open about their weaknesses. They echoed the words of St. Paul where he says, “I willingly boast about my weakness, that the power of Christ might be perfected in me” (2 Cor 12:9). The men on that retreat and St. Paul were unafraid to openly talk about their weaknesses because they had something in common: they had exposed their wounds to Jesus Christ. 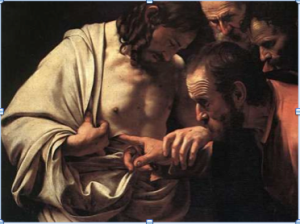 Doubting God’s goodness, we often try to hide our pain from him. Adam’s first reaction after eating the apple was to hide, but the Father still sought him out in love (Gen 3:9). Prayer stops becoming lifeless repetition for us when we actually start exposing our wounds to Jesus. Because in Jesus Christ, we find a man who is not afraid to expose his wounds to us. After the resurrection, Jesus came to Thomas and said, “Put your hand in my side and believe” (John 20:27). In Jesus, we do not find an impersonal God who doesn’t care about our pain, but a man who “is able to sympathize with our weakness” (Heb 4:15). When we experience Jesus loving us at our worst, we no longer need to hide our insecurities and receive the freedom to be vulnerable.

The fruit of vulnerability – guided by prudence – is true brotherhood. Think of the friendship of Frodo and Sam from The Lord of the Rings. These two men (hobbits actually) spent a lot of time together in the safe home of their Shire. But vulnerability really begins for Frodo and Sam once they step out of their hobbit holes on a journey to save the world. They talk along the way about their hopes and dreams, about their disappointments and failures. They bear each other’s burdens. We see clearly how just as “iron sharpens iron, man sharpens man” (Prov 27:17). As the story plays out, it is not strength and power that saves the world, but true brotherhood.

What an utter travesty it is that we have reduced our concept of intimacy to mere sexual expression. No wonder we as men often feel so empty and alone. The Book of James guides us toward true brotherhood by saying, “Confess your sins to one another that you may find healing” (Jam 5:16). Of course, this applies to the great gift of the Sacrament of Reconciliation for us Catholics. But I believe this is also an encouragement for us to be vulnerable. St. Augustine courageously shows us the way to do this in his book The Confessions. There, he reveals the good, bad, and ugly of his life and where God was working the whole time.

Under St. Augustine’s patronage, I have been involved in several small groups where men intentionally share their lives with each other. In these meetings, I have seen conversion take place, healing occur, vocations develop, and lasting friendships form. The enemy tries to make us believe that we are alone. By sharing our struggles, we fulfill the scripture in Revelation that says, “For the accuser of our brothers has been cast out, who accuses them day and night before our God. And they have conquered him by the blood of the Lamb and by the word of their testimony” (Rev 12:10-11).

The Courageous Step toward Vulnerability

If you are not currently in a men’s group, have you sought one out in your community? Any form of a men’s group is good: a bible study, Knights of Columbus, etc. However, I particularly encourage support groups like Christ Renews His Parish (CRHP), Cursillo, That Man is You (TMIY), or some other small group model with intentional sharing. If this is not available in your church/community, I challenge you to start one. Seriously! It only takes one man to step out and say “I struggle” to give other men the freedom to be vulnerable too.

You were not made for isolation; you were made for communion. May you have the courage to make a concrete step toward vulnerability in whatever way that looks like in your life right now. Do not be afraid to expose your wounds to Jesus who knows our pain and always seeks to find us.

Lord of the Rings Graphic: http://www.morethaneitheralone.net/frodo-sam-recs.html

Joey Martineck graduated from Georgia Tech in 2012 with a degree in computer engineering. He loves to write, act, improv, dance and sing and is the published author of the one act play Wise Men. Currently, Joey is studying philosophy at Notre Dame Seminary in New Orleans where he is in formation to become a Roman Catholic priest. You can read more from Joey by visiting his blog Beautiful Things, a place where art and the Church come together.